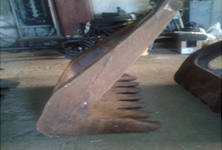 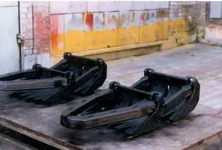 A scraper bucket is a device designed for loading, transporting and unloading ash and slag in coal-fired boilers.

Removal of ash and slag in the ash bin is carried out by a bucket moving along the guides in the slag collecting channel. The slag-collecting channel is constantly filled with water, which eliminates air leakage into the boiler furnace and sintering of slag and eliminates smoke in ash rooms.

PSKM scraper lifts are available in the following models:

The design of the scraper bucket-shovel. The bucket can rotate freely around an axis that is attached to the traction frame. When the bucket moves in the horizontal direction, when the slag is grasped, its rear end rises upward, however, approaching the inclined plane, the thrust frame rigidly connected with the bucket abuts against the guides, thus bringing the bucket into a horizontal position and thereby facilitating its movement along the inclined parts of the channel.

The bucket consists of two parts of the frame box. On the frame of the bucket, with the help of bolts, the axles in the assembly are attached – front and rear. Both axles are supplemented with flanged rollers. Wedge couplings are fixed on the rear axle, which are designed to secure the bucket with a rope. The entire box does not include a front panel.

The rear wall of the bucket leans inward using hinges. Folding in the opposite, external direction is impossible due to the emphasis on the bottom of the box.

The front part of the box, while vertically located, is movable relative to the frame, which in turn significantly reduces the drag coefficient exerted on the passage of the bucket in the channel when idling.

In order to improve the performance of the bucket and facilitate the flow of water during its movement along the inclined part, the side walls and the bottom wall of the bucket are perforated.

The tension device of the tail section of the PSKM elevator consists of a frame with a 50 cm diameter block with a frame. The drawer box slides freely and unhindered along the frame rails. The material poured into the box with a weight of up to 800 kg creates the necessary force for proper tension of the ropes, which in turn contributes to the most stable position of the rope in the streams of the supporting and guide blocks.

Breaking devices are designed to emergency stop the winch under the condition of breakage or significant stretching of the rope, as well as in the case of jamming of the bucket in the channel.