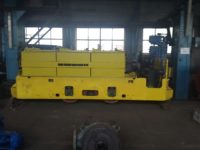 Designed for transportation of trolley trains along narrow gauge underground railways in the main recoil mine workings of gas and dust hazardous areas, where the operation of electric locomotives in the mine version of increased RP reliability is permitted. The AM8D electric locomotive is a two-axle locomotive with an individual frame suspension and with one cab. The 2AM8D twin electric locomotive consists of two biaxial sections connected by an articulated flexible coupling with two cabs at the ends of the sections.

Electric locomotives are equipped with a non-reactive control system with battery sectioning and an electrodynamic block brake system. As a source of energy are batteries.

Mine battery electric locomotives in the performance of the PB used:

in recoil mine workings of mines dangerous by gas or dust;
in mine workings with an outgoing air stream and dead-ends, ventilated by local ventilation fans;
in category III mines, supercategory in gas and hazardous in sudden emissions.

The frame is the main supporting part of the electric locomotive and serves to place all mechanical and electrical equipment on it, as well as create the necessary grip weight. It is a rigid steel structure consisting of side and transverse sheets of rolled steel, fastened by welding or bolts. To strengthen the frame, a connecting strip is welded in its middle part, which protects the frame from deformation during impacts.

At the ends of the frame are attached coupling devices, which are a double-acting buffer with rubber shock absorbers and a pocket-type pin coupling.

The cab for controlling an electric locomotive is equipped in the front (and on heavy electric locomotives – and rear) parts of the frame. It has a viewing window and provides access to both sides of the electric locomotive. The driver’s seat, controller, voltage regulator, sound signaling device, brake system steering wheel, sandbox control pedals, plug box, fire extinguisher are located in the cockpit, and there is a lighting headlight on the outside.

The brake system of an electric locomotive includes four-wheel shoe brakes with a manual drive and electrodynamic rheostatic braking. In order to fix the brake shoe system in a locked state, the latter is equipped with a ratchet device.

The sand system of the electric locomotive is designed to increase the adhesion between the wheels and the rails when starting off, when slipping the wheels during movement and during emergency braking of the train. It consists of two rear and two front sandboxes, longitudinal and transverse rods, handles and control pedals. Sandboxes are arranged so that sand always spills out in front of one of the wheelsets.

Both axles of the electric locomotive are equipped with individual interchangeable drives, which include a traction motor, gearbox, wheelset and two axle boxes. The gearbox can be two-stage (cylindrical or cylindrical-conical).

The battery box occupies most of the frame of the battery electric locomotive. Designed to accommodate battery cells and protect the latter from mechanical damage and water. It is made of steel sheets with a thickness of 6 – 8 mm, and for rigidity it is bordered from the upper outside by steel strips. An automatic power switch is installed on the battery box, which serves to connect the battery to an electric locomotive circuit or charging table.

For continuous monitoring and measuring the concentration of hydrogen in the battery box, an automatic gas analyzer (type PKV-2 or TP-1133V, etc.) is used. The gas analyzer ensures that the light alarm is turned on when the maximum permissible hydrogen concentration is reached (2.5% by volume) and the alarm is turned off after it drops below the permissible value (1.3%). The scope of delivery of the TP-1133V gas analyzer includes a primary converter and a measurement unit.

Explosion-proof battery box in the execution of the RV is achieved by means of preventing the formation of explosive concentrations of hydrogen inside its shell.

In the mine battery electric locomotive traction motors of the EDR-7P type with a power of 12 kW are used; DRT-10; DRT-13M with a power of 13 kW, etc. Turning on and off the traction electric motors, as well as the implementation of the necessary driving modes (starting, coasting, long driving) and reversing, are performed by a controller of the GR-9M, KRV-2, KR or KTV-2 type.
Protection of electric motors against overload and power circuit from short circuit currents is carried out automatically (ABP-2123, ABP-2122, VAR-4, VAR-4M, VRV-150M, VAB, etc.).
The installation of a maximum current relay at 200A is carried out at the factory.